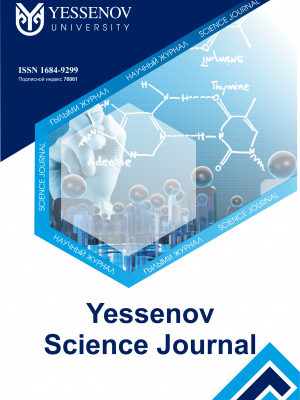 The complex of tasks to scientists today for integration into the world scientific community requires not only specific measures aimed at improving the quality and efficiency of scientific research, but also significant efforts to create an international scientific journal.

The journal is the official periodical printed edition of Yessenov University. The journal has a certificate of state registration № 9935-Ж dated 10.03.2009 (number and date of primary registration № 2564-Ж dated 26.12.2001) and is registered at the ISSN international center in Paris under the registration number ISSN 1684. -9299…

For the purpose of international visibility of the journal, the scientific journal Vestnik KSUTI im. Sh. Yessenov, published by the Yessenov University, was renamed into the Yessenov Scientific Journal, which is confirmed by the Certificate of Registration of a Periodical Print №17181-Zh.

The main goal of the journal is to promote the development of scientific research through the coverage of the scientific activities of specialists in scientific fields and the exchange of information on the areas of activity of the university.

An article in the journal can be submitted in Kazakh, Russian or English. The journal is published in print with a frequency of 2 issues per year (once every 6 months). The materials of the articles are strictly registered in the registration journal as soon as they are received by the editorial office.